Republic Day Essay 2023 – Essay on 26 January in English for Students – In our nation, the celebration of Republic Day takes place on the 26th of January. On this day in 1950, our country’s constitution was legally enacted, and India became a fully independent state.

Great heroes like Mahatma Gandhi, B. R. Ambedkar and other freedom fighters who struggled and lost their lives for the independence of our country established the foundation for our nation’s supreme legislation, the Constitution.

Therefore, the 26th of January was designated as a national holiday, and ever since then, it has been acknowledged and honoured as the Republic Day of India. Also, check Republic Day Speech & Tips in English. 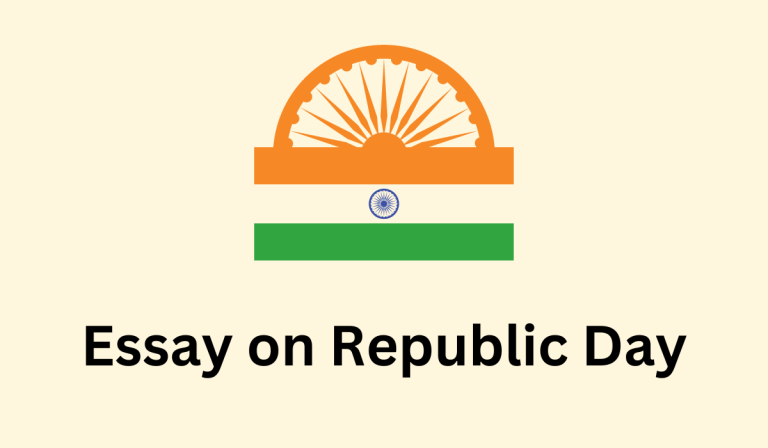 Even though we were officially free of British rule as of August 15, 1947, our nation did not have a written constitution at the time. In addition, India lacked the necessary skills and political strength to ensure that the government could run properly.

The Government of India Act of 1935 had been largely amended to manage the country up to that point, but it was still bent in favour of colonial power. As a result, there was an urgent need to create a unique constitution that would properly represent all that India stands for.

Indians celebrate January 26 with a lot of energy and excitement every year. On this day, people put aside their differences in religion, caste, creed, sex, and many more. It helps bring the whole of the nation closer together.

It demonstrates how diverse our country is. The celebration takes place in India’s capital city, New Delhi, with a parade known as the Republic Day Parade. This event highlights the might of the Indian military as well as the cultural diversity of our nation.

On August 28, 1947, a committee headed by Dr B.R. Ambedkar drafted the country’s constitution. After being drafted, it was submitted to the Constituent Assembly on November 4, 1947, by the same committee that had been responsible for writing it. This entire process was very time-consuming, taking up to 166 days. In addition, the meetings that the committee held were always open to the general public.

These parades are held in a number of cities around the country, and a large number of educational institutions take part in them. It is inspiring to see how much work both the kids and the professionals put in. They carry themselves with such dignity throughout the parade that it makes one feel patriotic.

On this day, we also participate in the hoisting of the National Flag. Following the raising of the Indian national flag by the President of India in New Delhi, a salute of 21 cannons and the playing of the national anthem by a military band are performed in response.

In addition, the March Past celebration is held in schools, and it is expected of each and every student that they are present for the celebrations. Additionally, on this day, many schools will hand out sweets to their students.

Even if today is a day filled with a lot of happiness, we must not ignore the fact that our forefathers fought hard for their independence. Additionally, it is a day to celebrate the spirit of independence and to make it a priority to assist India in achieving even higher heights in the coming years.

This day also marked the beginning of the very first session of the Parliament of India. Along with it, on the 26th of January, Dr Rajendra Prasad became the first President of India. As a result, it is a highly significant day since it symbolises the end of British control and the beginning of India’s existence as a republic state.